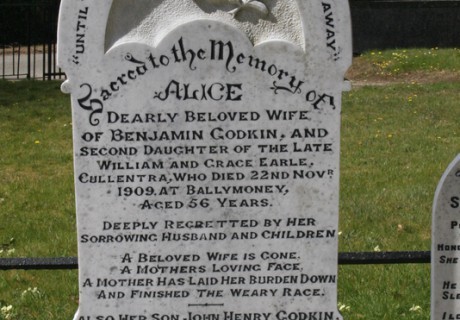 INSCRIPTION:
Until the day breaks and the shadows flee away.
Sacred to the memory of Alice dearly beloved wife of Benjamin Godkin and second daughter of the late William and Grace Earle Cullentra who died 22nd Nov. 1909 at Ballymoney aged 56 years.
Deeply regretted by her sorrowing husband and children.
A beloved wife is gone
A mothers loving face
A mother has laid her burden down and finished the weary race.
Also her son John Henry Godkin died 21st May 1892 aged 16 years.
Also the above Benjamin Godkin died 24th June 1913 aged 65 yrs.
'For ever with the Lord'.